This is my version of our annual holiday letter. It's been a few years since I've taken the time to write one, so this is a big improvement. Why not take advantage of the internet services available?

Highlights of the year, some of which have been mentioned in previous posts: our fun trip to Washington, D.C. in April and the cruise through the Panama Canal in September.

In between these we had a lot of work done on the house, completing repairs from last year's hail storm: a new roof, new paint, and some interior ceiling work. Next year we'll be looking at window replacement, and should probably consider carpeting - we're still living with the original rust/brown shag. It just won't wear out!

Tom just spent a week in Portland with Jon-Erik, where they celebrated a bit of Christmas. Next Tom heads to Mexico for the winter, and Jon-Erik will come to Bozeman. He's finished another quarter of his graduate program, and is still doing well.

James-Philip and Jamie have settled in to the house in town, and are planning a wedding! News hasn't gone out to everyone yet, so I'm taking a chance by posting here. But since I don't think there are many followers, it doesn't seem to be a big risk. (But if you read this, don't spoil the surprise!). They are using the family heirloom engagement ring, passed on to each Henley son. I believe he is the fourth Henley to use it. We hope they are as happy as we've been.
Posted by TeamHenley at 4:03 PM No comments:

This usually means the end of summer, but it feels like we've only just started having good weather. Bozeman's Sweet Pea Festival has come and gone, and students are starting to show up in town. Tom has been busy planting some trees around the yard (I must get pictures here!), and our roof has been replaced. Oh, and we had the septic tank pumped - not an exciting activity but necessary! We were pushing our luck (it hadn't been done since the last century!) but we're set for a while now.

Next month: cruising! We learned that one port has been deleted from the itinerary (engine maintenance means a slower speed? The Aircraft Maintenance man in the family finds it hard to believe a commercial entity can operate this way, but we'll see! Not the most confidence-inspiring email to receive, I think).

Jon-Erik is moving (still Beaverton, but better location) and working hard with his coursework. It's fun having library-related discussions with him. He'll visit for Christmas.

James-Philip has real work again, and Jamie has started a CNA course. Cats and dogs keep them company.

Posted by TeamHenley at 3:26 PM No comments:

A blog without recent posts is a sad situation indeed! And embarrassing...I'd like to think it's because we have been so incredibly busy there was just no time to write, but even that isn't an acceptable excuse - it takes no time at all to enter a few random thoughts.

After the April library conference in Billings, Tom and I met up in Washington DC for a fun spring vacation. The cherry blossoms were just about done, but we had a wonderful time doing all the usual tourist activities. I experimented with traveling with only a carry-on, and gate-checking that, which worked out really well! I also learned to verify airport codes on my itinerary, when I showed up at DFW (Dallas-FtWorth) for a flight that left from DAL (Dallas-Love Field). Luckily this was on a Sunday afternoon, with no traffic, and we were able to get to the proper airport with just minutes to spare.

When Tom returned to Bozeman in May, he found grass ready to cut, but constant rain prevented that activity. Things have finally dried out, but the wet spring has encouraged a heavy crop of mosquitoes! We're still waiting for the roof to be replaced (but should have a crew lined up to do it soon). James-Philip was waiting for work, so was able to help Tom quite a bit with the remaining projects (tree-trimming, etc).

Tom and I had planned a cruise in November, as a kind of birthday celebration for my 55th (to Rio!), but it soon became problematic: the flight connections were inconvenient, we needed to get our own Brazilian visas, it just didn't seem worth the trouble. So we found a much less expensive alternative, on a different cruise line, through the Panama Canal. We've done the Canal before but this will be San Francisco to New York. The biggest problem now is getting Tom's passport, which he left in Texas...He'll be making a long detour before our trip begins.

I'll take bets on when I get around to doing the next post. Anyone want to guess?
Posted by TeamHenley at 3:25 PM No comments: 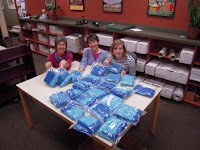 Good thing I didn't make a New Year's resolution to keep our blog up to date - that would have failed miserably! I always expect January to be slow and quiet, after the holidays, but suddenly January is gone and February is over half gone too.
Back in December a co-worker (Katy, far right in the photo) mentioned the Scarves for Special Olympics project, so we decided to see how many we could get made before our state deadline. People at work, several of my other knitting friends, even a vendor at the mall got involved - we ended up with 28 scarves! The local UPS store graciously offered to ship them for free. We're anxious to find out the colors for next year's project so we can get started. More time will allow more people to contribute - we're aiming for 50 scarves!
Tom and I have planned a get-away to Washington DC in April, once he returns from Mexico. It's been several years since we've been there, so we're looking forward to exploring the new places we haven't seen yet. Cherry blossom season will probably be done, but the weather should be pleasant.
And hopefully I'll have posted a few more entries before then!
Posted by TeamHenley at 5:49 PM No comments: